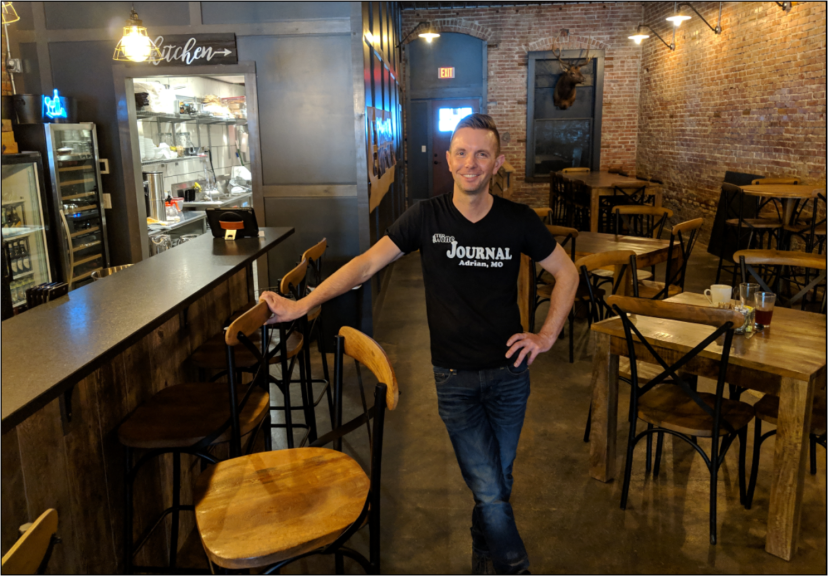 Daniel Horner is the owner of the Adrian Wine Journal, a wine bar and eatery which officially opened last week in downtown Adrian. Housed in the same building as the former Adrian Journal, the recently-renovated space features a rustic setting and relaxed atmosphere.

Growing up in Adrian, Daniel Horner spent a lot of time in the offices of the Adrian Journal. His family was friends with Steve and Linda Oldfield, the owners of the now-gone publication, so he got to know the building well.

When he decided he wanted to open a business in his hometown and the old Journal building at 39 E. Main St. was available, he knew he had found a home for his new business, one which gives a tip of the cap to the former business.

Last week, Horner officially opened the Adrian Wine Journal after receiving his liquor license from the city. Horner said his idea was to bring some big-city style to the area.

“I wanted to do something different. There are people in Adrian and the surrounding area that can now come here to get the city experience without driving all of the way to the city,” he said.

Horner said he hopes the business will become a destination and tourists will come off the highway to see what he has to offer. While there is an assortment of wines from throughout the country, 15 different wines are featured which come from Missouri wineries. In addition, Missouri beers make up the majority of  his beer selection.

The Adrian Wine Journal offers a wide array of wines, but a specialty of the house is wines produced in the state of Missouri.

The décor of the establishment is much different than when the building housed a newspaper.

“When I got the building, it was all finished with paneling and plaster. When I was looking at it, I actually chipped a piece of the paneling away to see if there was brick back there, and there was,” he said

The wine bar features the rustic look of the brick walls, with a warmth created by soft lighting, and even a music program developed for wine bars which offers everything from classic rock to country, but in a soft and unobtrusive manner.

While the wine is the star of the show, Horner notes that you don’t have to drink wine to enjoy the surroundings. A food menu features an assortment of foods which are fine by themselves, but also complement the wine.

“We are open for lunch, so it’s not all about the wine,” Horner said. “But I do prefer to think of it as a wine bar and eatery, not a restaurant and winery.”

Even in his food menu, he offers a salute to the building’s newspaper roots, with appetizers labeled as “The Front Page” and sandwiches “Hot Off the Press.” A wide assortment of gifts and gadgets are available at the Adrian Wine Journal.

The Adrian Wine Journal is the first restaurant experience for Horner. He attended Missouri Southern University and graduated with a degree in health promotion and wellness. He spent seven years in the healthcare field in Springfield before going into retail management for four years. He returned home in October 2017 to work on the family farm, but realized after a couple of months that it was not what he wanted to do.

“We hosted a few wine parties and I thought it was fun,” he said. “I thought, this could be something I want to do. And then when I heard about the building being available, I had a floorplan figured before I even went into the building.”

Horner said the food and wine menu will change seasonally, and he is looking to expand his wine selection.

Horner said the wine selection should cater to any taste.

“We even have a Moscato, a sweet wine for people who don’t like wine,” he said. “I just hope people will come in and check us out. I think they will want to come back, even if they don’t like wine.” 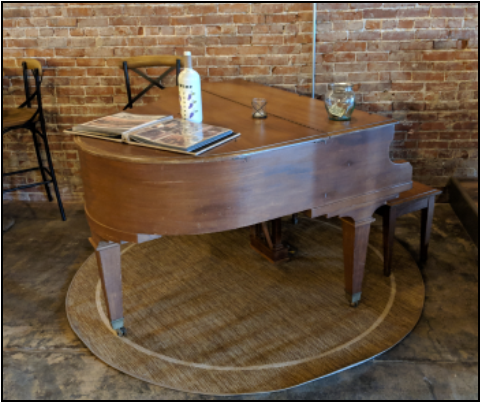 A baby grand piano not only adds an elegant touch to the Adrian Wine Journal, but also can serve as a source of entertainment upon occasion.