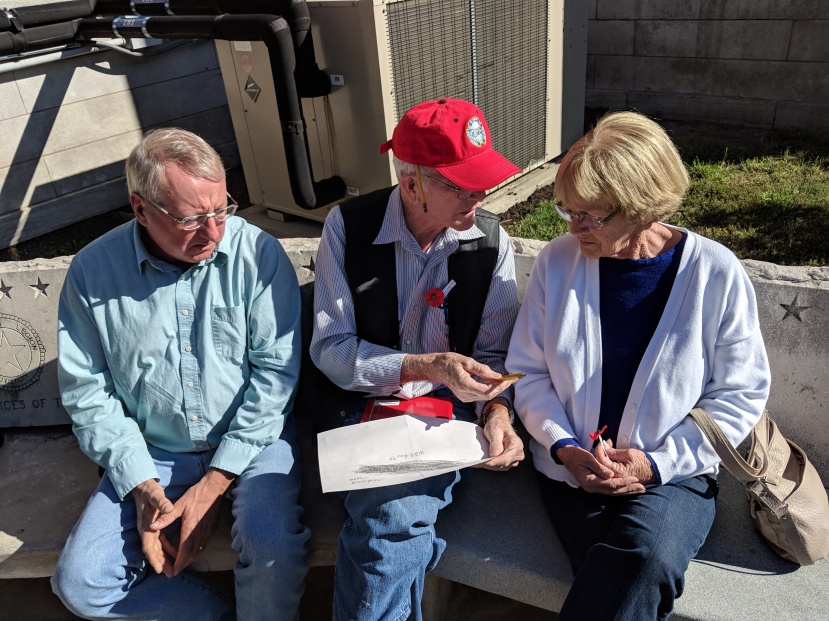 In February 1968, the Future Farmers of America (FFA) was holding its annual convention in Kansas City. Harrisonville business and civic leader John Foster volunteered to drive some of the local participants up to the city for the event. One of the group was a Harrisonville High School senior, Larry Knox.

While on the drive that day Foster said he talked to the students about their future plans.

“Larry said he was going to join the military. I don’t remember if he said what branch, but he knew he was going straight from high school into the service,” Foster said.

He never saw Knox again, but speaking with the high schooler that day has stuck in his mind throughout the past 49 years, Foster said. And last week he finally was able to complete a long-awaited task.

Foster visited the Vietnam Memorial Wall in Washington, D.C., to rub Knox’s name from the wall honoring the 58,200 veterans who lost their lives in the war.

“I remember he was going into the military and I know that he died a year later. I’ve been wanting to get to the memorial so I could rub his name and give it to Monty Kisner, who is Knox’s nephew,” Foster said.

Foster was chosen to take the trip on Oct. 18 as part of the Heartland Honor Flight, an organization which takes veterans from World War II, Korea and Vietnam to Washington to see the memorials honoring their service, as well as Arlington National Cemetery and other memorials dedicated to veterans.

While Foster was chosen for his service, he acknowledged visiting the wall for Knox’s memorial was a major motivation for applying for the trip.

“When we were at the World War II Memorial, there were those 400 stars and each represents 1,000 men who never came home. Then we lost 36,914 in Korea and another 58,200 in Vietnam. And now we’ve had another 5,000 in Iraq. I think of all those young lives and how strong this nation could be if those young people had been here to lead us.”

On Monday of this week Foster completed his mission by presenting the rubbing to Kisner, as well as one of Knox’s three remaining siblings, Phyllis Hughes, Harrisonville. The other sisters are Mary Miller and Joyce Stevens, both of Adrian. Knox had been the youngest of 10 children.

Kisner, South Commissioner of Cass County, has never been to Washington to see the memorial so he expressed gratitude to Foster for making the gesture.

“I am very touched. This is something I will want to keep in the family. Uncle Larry is in all of us,” Kisner said.

“He was a pure gentleman. He was a very kind young man. He knew he was going to get drafted so he enlisted so he could get his military duty done and get on with his life. He joined the Marines because he wanted to do it the way he wanted to do it,” Hughes said.

Knox, a private first class, was killed in March 1969 having been in Vietnam for less than a month.

“He was in a group that jumped out of helicopters. There were seven of them that jumped that day and they jumped directly into an enemy nest,” Hughes said. “Before he left he told us all goodbye. I think he knew he wasn’t coming back.”

Knox was honored with a Purple Heart. He was the first Cass Countian killed in the war and is buried in the Wills Cemetery in Peculiar. The other Cass Countians killed in Vietnam all came from Belton: Cpl. Darrell Wayne Aspy; WO Robert Louis Frausch; and PO2 Carl William Hudgins, Jr.

Kisner said he is most appreciative that times have changed and that people like “his Uncle Larry” could be honored as heroes.

“It is great that finally the heroes from the Vietnam era are getting the recognition they deserve, it’s much different than it was at the time,” Kisner said.

There is more information about Knox available at the Cass County Historical Society.

Categories: Around the Community