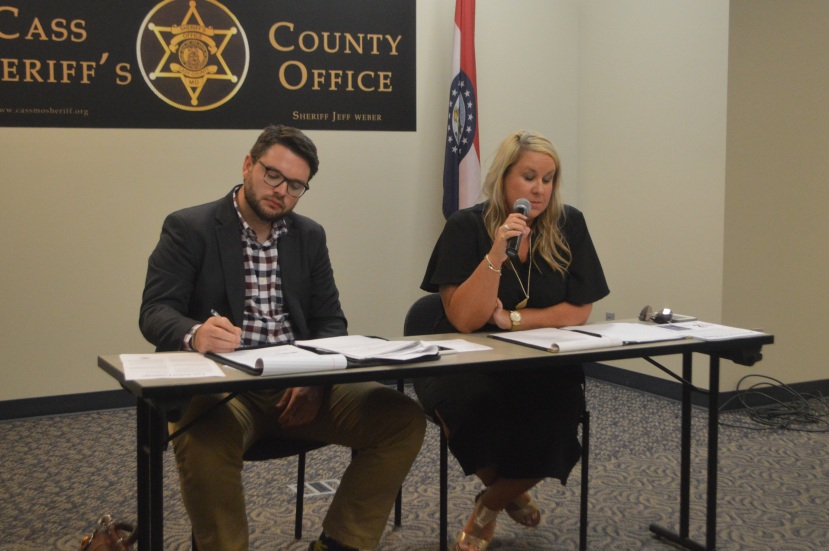 In an effort to inform voters about the issues on the Nov. 6 ballot, two members of Secretary of State John Ashcroft’s office, Chrissy Peters, a Democrat, and Brandon Alexander, a Republican, were in Harrisonville last week to explain the initiatives and answer questions. The meeting was arranged by Rep. Donna Pfautsch.

Missouri voters will have more to think about than just candidates when they vote  Nov. 6.

On the ballot there will be four Constitutional Amendments and three propositions. Three of the ballot issues call for the legalization of “medical marijuana” in Missouri while others involve various election law changes, the minimum wage, bingo games and gas taxes.

In an effort to inform voters about the issues, two members of Secretary of State John Ashcroft’s office were in Harrisonville Oct. 2 to explain the initiatives and answer questions.

Chrissy Peters, a Democrat, and Brandon Alexander, a Republican, from Ashcroft’s staff were invited by State Rep. Donna Pfautsch to conduct the meeting. About 40 people attended the one-hour event which was held in the Cass County Sheriff’s conference room.

The pair explained that of the seven issues, five were initiated by citizens’ petitions while two were generated by the state legislature.

After every general election, a new cycle begins for citizens’ petitions. Since the 2016 election 311 citizens’ petitions were filed with the Secretary of State’s office. Once filed, members of the Secretary of State, Attorney General and State Auditor’s office, along with local election authorities, have to validate signatures on petitions. During this cycle more than 1.5 million signatures appeared for verification.

When completed, there were the three amendments and three propositions which were certified to go on the ballot. Proposition A which dealt with “Right to Work” law was on the primary ballot in August.

Marijuana legalization is the subject of Amendments No. 2 and No. 3, as well as Proposition C. The issues vary in numerous ways including what qualifies as medical need, the tax and the use of money raised.

If passed, Amendment 2 would tax “medical marijuana” at a 4 percent rate. It is anticipated the tax would generate about $18 million for the Missouri Veterans’ Commission for veterans’ healthcare and the state Department of Health and Senior Services to administer the licensing and regulating the sales. It would also generate about $6 million for local government. It is believed it would cost the state about $7 million per year to regulate the laws.

Amendment 3, would create a medical research institute which would be funded by a 15 percent tax on marijuana. The amendment is written so the petition’s leader, Brad Bradshaw, would be the chairman and appoint the committee which would oversee the research institute. The tax would raise about $166 million annually and it would cost $186,000 to implement the program.

Responding to a question, Alexander confirmed the Brad Bradshaw listed on the ballot summary is the same person who has television commercials promoting his law practice which specializes in medical malpractice.

Alexander emphasized that none of the options would affect federal law.

“In the fair ballot language, we note it does not change federal law which makes marijuana possession, sale and cultivation a federal offense,” he said.

He was also asked what happens if two or three of the amendments or proposition pass?

“Sit back and enjoy the court battle,” he said. “There is some verbiage that the initiative with the highest vote total would prevail, but there will be court battles.”

The first is Constitutional Amendment No.1. The amendment, which was brought forward through a citizen’s petition, deals with a number of issues concerning elections.

It establishes a new system for reapportioning legislative districts statewide which is done every 10 years following the federal census. Under the current system, the governor’s office appoints a commission which oversees the process. Under the proposed amendment, the state auditor’s office would nominate candidates for the position of state demographer who would oversee the process.

The amendment would also lower the limits candidates for state senate or the state house of representatives could receive from individual donors.

The bill would also limit gifts from lobbyists by capping such gifts at $5. Additionally, retiring legislators or their staff members would not be allowed to become lobbyist until two years after they leave office. It also has prohibitions on fundraising on state property and Sunshine Law requirements.

The amendment was challenged in court as being too broad and covering too many topics. The bill, titled “Clean Missouri,” was removed by a trial court, but was reinstated by an appeals court in September. The Missouri Supreme Court declined to hear the case.

Those seeking to remove the issue included the Missouri Chamber of Commerce and Industry whose CEO called the bill “a poorly drafted amendment.”

Although not discussed as such during last week’s forum, it has been argued the Clean Missouri bill is an attempt to curtail the powers of the executive and legislative branches in the state, both of which are controlled by Republicans.

Constitutional Amendment 4 was drafted by the legislature and deals with bingo games operated by non-profit entities in the state.

The amendment legalizes advertising which had been banned, but a court had ruled that law unconstitutional. It also allows members of the sponsoring group to handle money after six months of membership instead of having to wait two years.

Finally, Proposition D was generated by the legislature and has also been challenged in court, but remains on the ballot. The bill calls for increases in the state’s gasoline tax raising the rate by 10 cents per gallon over four years.

The bill states the money will be used to fund the Missouri State Highway Patrol’s enforcement and administration.

The bill is expected to generate $288 million annually including $123 million for local governments. The bill also exempts prizes won in the Olympics, Paralympics and Special Olympics from income taxes. Additionally, it creates a “bottleneck fund” for “financing road improvements in the state.”

Alexander explained the Olympic prize details are included because that was what the original bill actually dealt with. All of the funding was placed on to the bill before passage.

He also acknowledged that many people have said the bill will not increase money for the highway patrol, but will instead raise funds for roads and bridges, including what the bill refers to as the “bottleneck fund.” Critics have also said once the department of transportation receives the money there is no guarantee it would actually be used for roads and bridges.

Alexander noted one of the propositions runs 49 pages. All of the ballot issues can be found in their entirety on the Missouri Secretary of State’s website.

Peters also pointed out that absentee balloting is available and open. Anyone who might not be able to vote on election day can contact the county clerk’s office to request an absentee ballot.